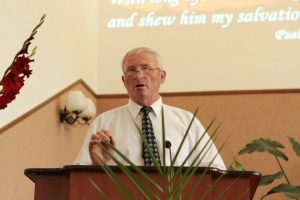 Raised in a Christian family, Georgiy Doroshenko accepted Jesus as his Savior at a young age when one of the pastors at his church presented the gospel. A few years later, he felt that God was calling him to be a pastor, and he has had a burning desire to teach every since. Georgiy’s church chose him to be a pastor at a home church nearby at a time when few men in the Ukraine were pursuing ministry, and that home church grew to become the Church of Christ the Savior.

Georgiy met his wife, Nadia, on a bus after he had been praying for a godly wife who would be willing to serve alongside of him. They have two children and six grandchildren.